My first taste of racing was at a circuit that I had never seen before, and I remember going flat out down the Revitt straight in practice thinking "is it left or right at the end?".
For the production class races, it was always a dead engine start. As the red flag went up, everyone cut their engines and poised their twitchy right foot over the kickstart as the Clerk of the course left you waiting for what felt like an eternity, just teasing you as you could hear your heart pounding in your chest and the clattering sound of your eyelids as you blinked.
The green light would come on, and the earth shattering silence would be broken by the sound of 40 two strokes cracking into life and emerging from the start line fog like charge of the light brigade as we all raced towards the first corner.
I remember thinking I got a good start and aimed to stay with the leading bunch, then suddenly, instead of breaking for the first corner, they just pitched their bikes over onto their sides...I was dumbstruck, and thought "thats impossible", never before had I ever seen anyone bank a bike over as much as that. Sure, I'd seen racing on the TV, but to see it happen in front of your eyes was a whole new ballgame.
I came away from my first meeting finishing somewhere in the mid field thinking I was in serious need of upping my game here.
My next meting was at Brands Hatch, a circuit that I was very familiar with. The stiff talking to I had given myself after the last race seemed to work, and I came home in all of my races as the top novice but was still way out of touch with the leaders.
Although the KR1 was supposed to be the easier of the production bikes to ride at the time, I was finding the powerband on my bike quite difficult to manage as it never quite seemed to be in the power when I needed it. I persevered as best I could and got some mixed results and a crash by mid season. My father was telling me to give up and said that I'll never be any good, so why bother.
This made me determined to prove him wrong, and by the second half of the season, I was getting regular top six finishes in the 250 production class and in sight of the leaders. For most of that season, it was pretty much the same top 5 people jostling for position and winning races. I looked upon these racers with God like awe and admiration and I was so chuffed one day when one of them gave me a nod of acknowledgement and a wink whilst casually walking down the pit lane.

1991
For 1991, I decided to campaign the newer and more advanced KR1S. I got a good deal on a liquidation sale from someone who failed to setup a racing academy. I promptly stripped the bike down and set the cylinders, heads and carbs off to Bob Farnham to do his stuff.
The rules on fuel for this year had changed so that competitors were no longer allowed to use leaded fuel.
Even though I had instructed Bob to setup the engine to run on unleaded, the bike siezed solid in practice going down the Revitt straight at Snetterton. All that time and effort in getting the bike sorted for the first meeting was totally wasted.
For the 2nd meeting at Brands Hatch, a new set of pistons was installed, and the fuelling adjusted accordingly.
In the 250 proddy race, I got off to a flying start and was within the top 6 as we entered Paddock, then up to 4th as I entered the hairpin. For the next laps, I thought that any momnent now they are going to come steaming past me....but they didn't. Not only that, I was catching the rider in 3rd. I got a good drive out of clearways and passed him down the straight.
Oh my God, I am racing with my heroes!
Now full of confidence I pushed harder and took 2nd place as the rider in front drifted wide and got a wobble on at the bottom of Paddock. We traded places a few more times, until I finished the race in 3rd position.
The season continued like this with many more to 4 finishes in the 250 proddy class and multiple wins in the 350 open Novice and not to mention a few spectacular crashes.

1992
For 1992 I sold the trusty KR1S and bought a Suzuki RGV250. As before, the engine was carted off to Bob Farnhams or ProBike as it was later called. Bob had decided to spanner for Terry Rymer that year, so left the running of the business to his partner Steve Kemp.
Steve did his work on the RGV, and although I managed to win a couple of 250 proddy and supersport races, I only managed 11 meetings that year, 7 of which had mechanical failures due to the poor tuning of the engine. When Bob returned from world Superbike, he promptly sacked Steve and then helped to put my engine right, but by this time I was pretty sick of the RGV and wanted rid of it.

1993
Fed up and quite broke, I sold the RGV and with a little encouragement from a friend, bought a little Yamaha TZR250 to race in what would later be called the Yamaha Past Master racing series that consisted of production TZR250's and RD350 powervalves.
I entered late for my first race in '93 as I had only picked the bike up form someones garage in which had been sitting for the past 5 years. I was unable to purchase any Avon tyres at the circuit, so instead fitted a pair of skinny Yokohama ditch finders. From the first lap I could tell something was wrong. The bike would bob, weave and tie itself in knots at the slightest sniff of a corner, it was a wonder the thing didn't spit me off. Bust despite the poor tyres, I manged to bring the little TZR home in 6th place.
For the next meeting, I fitted the proper Avon tyres, and the handling was transformed.
For the first TZR race, I got to the front of the field and tailed the leading group for a few laps. The pace felt pretty easier, so I went for the lead and pulled out a gap to finish comfortably in first place.
For the second race, I was placed on the back row and had my work cut out for me to get to the front.
After tow laps the race was red flagged, and we all formed up on the grid for a 4 lap re-start. This was going to be a bit of a tall order to get from the back of the grid to the front in just 4 laps. On the last lap, I found myself in second place about 10 bike lengths behind first as we entered the Revitt straight. I got a great drive out of Sear Corner and carried that momentum down the straight to shrink the gap to about 4 bike lengths.
I braked hard and late going into the Esses and closed further going round the Bombhole.
I was approaching fast coming into Coram, so I decided to simply ride round the outside of the leader, who seeing me pass him, just seemed to give up. It was a quick right left flip going through Russles to gain yet another win in the TZR class.
At the end of the day, as we had a few drinks in the Club house, the officials read out the results for the races and presented trophies. As the announcer called out the winner for the TZR250 race, the rest of the TZR competitors mumbled under their breaths "TZR500 more like" and so I became one of the most disliked TZR riders in the paddock!
There were 8 more wins in the TZR class that year, plus quite a few top 3 finishes in the Supersport class against bikes significantly more powerful than mine. 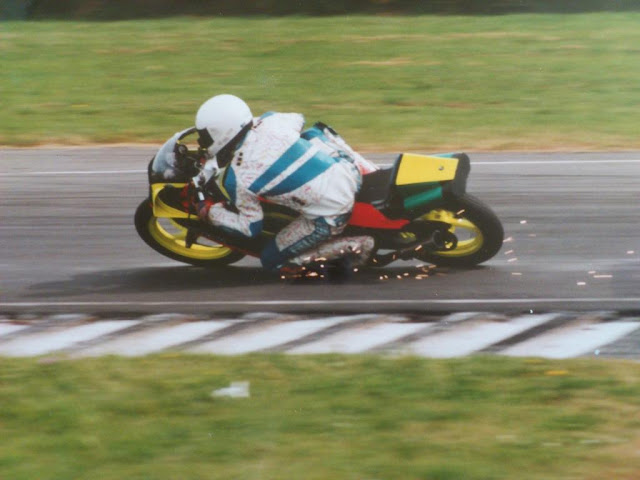 For the October Powerbike meeting, Stan Stephens lent me one of his race bikes for me to race in the Supersport race. The Bike felt fast, but was a quite peaky, and with a little over exuberance with the right wrist after being knocked down to last place after a first lap incident, this happened; 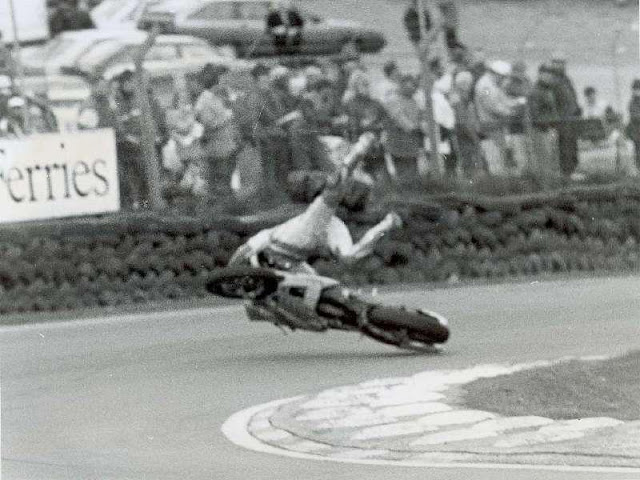 1994
At the start of 1994, my Father lent me the money to buy a '94 spec Yamaha TZ250F.
The TZ Yamaha is a pure bread racing machine (like what they ride in Grand Prix's) and not a converted road bike. The difference was amazing. Not only did it have more power (80hp on a good day), but it weighed about the same as a road going 125. It took some adjustment to get used to the different riding technique of the TZ and I also suffered a series of mechanical breakdowns and suspension problems through out the season which ended me being spat off the bike in a violent fashion at Clearways in the last lap of the last race of the last meeting of the season.
I took a really big knock when I went down and remember hearing a loud bang as I hit the tarmac, which I'm not sure whether it was my head hitting the ground or my collarbone snapping again for the second time.
94' was a really stressful season and seemed like everything was going wrong, and with the crash at the end of the season, my confidence had taken a bit of a beating too.
As I lay in the gravel trap looking up at the sky with a stabbing pain in my shoulder, I thought, right, one more season and I'm retiring.

1995
'95 was a much better season than '94, although I didn't enter as many races as I would have liked due to college work, I had a number of really good results and I was up there and swapping paint with some of the fastest 250 open class club riders in the country. I managed two wins at Snetterton, and was standing in 4th position in the championship with one more round to go which was eventually cancelled due to club  'administrative' problems.

In 1996. I moved out from my parents and started a new life for myself in Sussex. I always meant to go back to racing, but I never quite knew when. I would do the odd trackday now and again, when finances allowed,   but it was never quite the same...
Posted by scooble at 08:54