How it all started

About Me and racing.

It all started a long time ago, in a village far far away.
There was a young girl, who longed for adventure in the little sleepy village of Old Basing in Hampshire.

Its true to say that I grew up with motorbikes, although, strictly speaking I'm not from a motorcycling family.
When I was 8 years old, my Older Brother Kevan who was 17 at the time, got his first motorbike.
Kevan had lots of biker friends, and I kind of got used to the comings and goings of bikes at our house who would often stop in for a cup of tea and a chat. Over time, I got to know his biker mates and all the different bikes that they rode. Mum was reluctant for me to ride pillion, so it was a few years before I got to go on the back.
One of my brothers mates called Dave started road racing, and so began my fascination with racing. Dave first started in the 500 production class on a Suzuki T500 and would turn up to our house in his 'Team Stephanie' transit van smelling of Castrol R which I remember oh so well.
Dave moved from the production class into 350 open Grand Prix class on a Yamaha TZ350.
I remember the noise, the smells and the excitement of seeing my first road race at Brands Hatch in the mid 70's. The blue haze of Castrol R and hot brake pads captured the mayhem of a full grid of club riders jostling for position as they roared to Paddock Hill bend.
Kevan never participated in racing, but instead opted to attend the Brands Hatch racing school run by the enigmatic and ever so funny Geoff Croockbane (think of a cross between Captain Jack Sparrow and Dave Allen).
Each pupil would enter the one or more events each year, and depending on how well they rode, they would be invited back to the Star Pupil day.
The Star Pupil was a series of heats and races. Kevan always did pretty well in his race, but never actually managed to win the even outright. His biggest claim to fame was that he raced against (and was beaten by) the ex F1 world champion Damen Hill, who later went on to compete and win the Champion of Brands and received a full racing scholarship on a Yamaha TZ350 before switching to cars.

I attended many club meets at Brands Hatch as well as some of the national meets such as the Transatalntic road races and I am also proud to say that when I was 10 years old, I also met Barry Sheene the year he was world cahmpion at Malory Park got got him to autograph a poster of mine.

Kevan rode to most of the big meetings at Brands Hatch in a convoy with all of his friends, and for the most part wouldn't let me ride pillion, so had to hitch a lift of someone who was always driving. 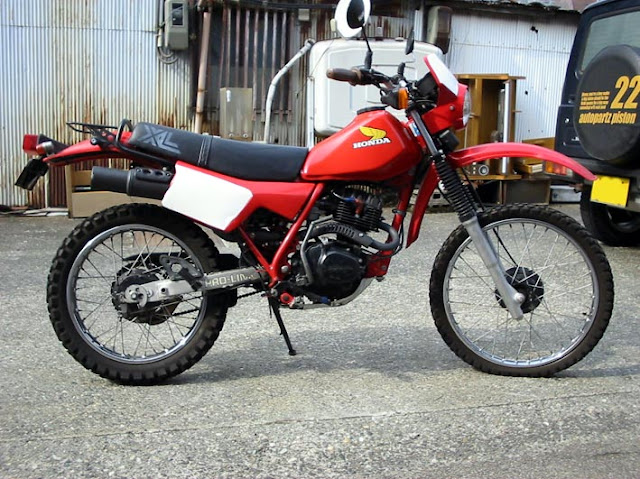 Yes, I know its an off roader and a 4 banger at that, but I liked my little XL, and being an offroader, it was very forgiving and allowed me really push it hard on the rough stuff and get used to crashing (and boy, was I going to crash alot!).
I would spend many summer evenings on the unofficial motocross track in the middle of the Basingstoke Thornycroft roundabout (before they butchered it and shrunk it down to the size of a bed sheet).
Although the little XL was great, I was hankering after a Suzuki RG250 Gamma MkII. 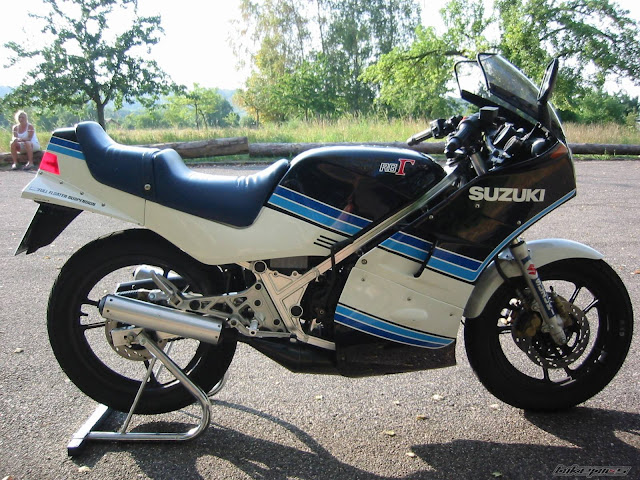 The little Gamma was the pinnacle of cutting edge at the time, with a box section aluminium frame, Full Floater (fnar fnar) suspension, twin double opposed piston calipers and a water cooled reed valve two stroke engine wrapped up in a lovely full fairing.
I saved as much as I could and after passing my full motorcycle test, I bought a lovely little Gamma from a town not too far away.
With the Gamma, I felt as though I became instantly famous within the village and would tear arse around at silly speeds and chase anything on two wheels.
I was young and full of the joys of two stroke powerbands and associated naughtyness.
I kept the Gamma for a year before selling it to an old school friend and then acquired one of the infamous Grand Prix replicas of the time, i.e. an HRC NS400R.

The 'Nessie' was a great looking and handling bike, and although I loved two strokes, it really did sound like three Honda Melody mopeds bolted together, such was its nasally 3 cylinder engine.
Although the Nessie was a great bike, I also missed sharing with some of the offroad antics that a few of my friends used to get up to. Feeling a bit left out when they went off green laning on their XL Honda's, I decided to join the fray, but what with?
I looked around for a few months for a 'suitable' offroader before taking the sensible decision of acquiring a Yamaha IT465 enduro bike (basically a YZ465 with lights on). The IT was one hell of a monster that wouldn't hesitate in wheelying in  all 5 gears with a touch of throttle. It was an absolute hoot to ride as I terrorised the village on the back wheel.

When I was 18, myself and two other friends got our first experience of racing by also attending the infamous Brands Hatch Racing school that was still run by Geoff Crookbane.
Kevan had been attending for years, but this was my first time and I had a bad attack of 'race tummy' (think of Deli belly and times by 10!).
I was so nervous, I could hardly stand and my mouth was so dry, my cheeks were sticking to my teeth as I sat down in the briefing room in amongst all over the other riders who all look 'fast' just sitting there in their own matching leathers, boots, gloves and helmets. Mr Croockbanes method to calm everyone's nerves was to real off a series of anecdotes about the multitude of crashes that he had witnessed over the years as the head of the racing school in a Lee Evans type animated frenzy that would instead of having you $h1t yourself, would in turn, have you pi$$ing in your pants with laughter.
With the tension broke, it was time to get out on the track. In the first couple of sessions, I took it easy and learnt the track, and as my confidence grew, I began to up the pace and found that my friends were holding me up, so I decided to pass them. I upped my pace further, and found that without even trying, I got my knee down for the first time - Yay!
This felt great, I had the bike cranked over on its side, knee on the deck and I was starting to catch Kevan. Within a few corners, I had caught and passed him....wow, I had actually passed my older brother, the Star Pupil rider at my first ever racing school event.
At the end of my session, I could hardly remove my helmet as my grin was so big. I was over the moon and Mr Crookbane even came along to pat me on the back and call me his 'little superstar!!'
Unfortunately, the racing school no longer ran its Star Pupil event any more, so I never got the chance to see how I fared against all of the other top riders.

By this time, I had sold the nessie to another old school friend and bought a limited edition Pepsi RG500 gamma.

The Gamma, although it didn't handle as good as the nessie, was a beast. The sound of the disc valve square four two stroke engine was awsome on full chat.
I was planning on converting the Gamma to full F1 spec, but, I thought, before I do that, I'll give the racing school one more go.
The racing school moved from Brands Hatch to Malory park the following year. This time, I was riding on my own, as Kevan had his knee in plaster following one of his many knee operations. Mr Crookbane was no longer running the operation, so the briefing wasn't quite so entertaining (quite boring actually), however, I was there for the racing, not the entertainment.
I was late out for my first session as the mechanics were bending the forks back into shape with a scafold pole (I kid you not) following a bit if a prang.
I was late out on track and rather miffed (oh dear), and set out from the pits going as fast as I could, and before long, I caught the tail end of the group in front. I then quickly dispatched all of the riders out on the track, and was left circulating on my own for a couple of laps before the chequered flag came out.
During the lunch break, I was approached by two of the riders in my group, and they both asked me if I was a full time club racer such was the pace at which I passed them, I replied no, but at that point, it got me thinking 'hmmmm'.
In my afternoon session, I quickly made my way to the head of the group, but was joined a lap later by another rider. I passed him going into the hairpin, and he passed me coming out of Gerards, and proceeded to weave his way down the straight to prevent me from passing. Anyway, as we entered the Esses, his back wheel lost traction on the right hander and he low sided the bike, I stood the bike up and braked as hard as I could, but it was to late, I was heading straight towards the fallen rider.
Before I knew it, I was flying over the handlebars and hit the track with a thump. I felt a bit shaken, but remembering the briefing, I got up and ran to the side of the track and vaulted the barrier. Miraculously the fallen rider was also Ok and also made his way to the side of the track.
I didn't feel anything for a while, but after a minute or two, my right shoulder felt incredibly stiff.
I was picked up by the ambulance and taken to the medical center for a checkup.
By this time, the adrenalin had worn off, and I was starting to feel a bit 'wousy' and the pain really kicked in when the medic started peeling off my leathers, and it was at that point, I went white as a sheet and nearly passed out.
The medic guessed I had a broken collarbone, and was promptly taken to Leicester Royal Infirmary by my father where I waited for hours to get an X-ray before being sent home with a confirmed broken collarbone with my arm in a sling.
Despite the crash, I couldn't stop thinking about being asked if I was a full time club racer.